Whether you are traveling to Singapore for vacation, or you’re simply passing through, here are some recommended activities to help keep you and the family entertained. – Tips and photos by Jenni Burdette, May 2013

Know of a great place to eat in Singapore, or an activity that should be mentioned? Please share! File a Trip Report or leave a comment. We’d love to hear from you. 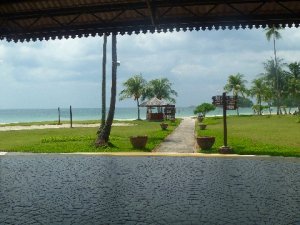 Two scheduled flights leave Yokota nearly every week for Singapore, so it’s a really easy Space-A destination. But where do you go from there if you’ve made no plans and you don’t want to spend a million dollars? Our family faced that dilemma when the five of us landed in Singapore on a spontaneous trip in August 2011. Luckily we found our paradise island just a boat ride away.
We had hopped to Singapore on the DC 8, arriving early in the morning. We spent a night at the Navy Lodge before we figured out where to go next. (For van service, we called Jeffrey Koh of CJK Express when we landed. He picked us up at the terminal and took us to the Lodge for $40.00. His cell: 9683 8839.) The Lodge was a bit out of the way but spacious and clean, and we found a few pretty good restaurants within walking distance from base.
I did a little Internet trolling and hit on Bintan Island, in Indonesia. We’d never heard of it, but it sounded great. So the next day we took a 55-minute ferry ride from Singapore to Bintan. On the ferry we were able to obtain visas for $10.00.
All the Bintan hotels have complimentary shuttles to take you to your hotel. We stayed at the Mayang Sari Beach Resort. We got two beautful “chalets” that were right on the beach for about $180 each. We had never stayed right on a beach before so it was a real treat to hear the waves crashing at night. Our rooms included a daily breakfast buffet. 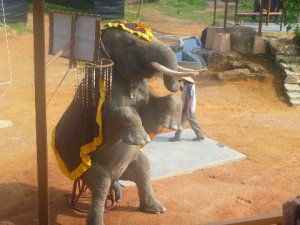 There were plenty of activities for our kids. They jet skied and zip-lined . We also saw an Elephant show and rode the elephants. We took a boat tour through the Mangrove Forest, which was also fun. The island also has several golf courses.
We had wonderful dinners every night at nearby restaurants. The hotel shuttle would drop us off at them. The staff at the hotel were so kind and welcoming. My only regret is that I didn’t get a massage, which I later learned are super inexpensive. I felt so relaxed while I was there that I never thought about it.
Ferry information: www.brf.com.sg
Bintan hotel options: www.bintan-resorts.com
Heather Mitchell, 2011

Confused about how to fly Space Available? Check out our Space-A primer: http://yokotatravel.com/2010/12/07/space-a/